After four days on Yankee Station, while aircraft were being prepared for the second launch of the day against targets in Vietnam, a fire broke out (a Zuni rocket was accidentally fired) on the flight deck of United States Ship Forrestal CVA 59. A chain reaction of explosions among the aircraft loaded with bombs and fuel caused flames to engulfed the fantail and spread below decks touching off more bombs and ammunition.
Heroic efforts by members of CVW-17 and ship's company, brought the fires under control. Damage to the carrier and aircraft was severe and the casualties included 132 dead, two missing and presumed dead and 62 injured. A total of eleven A-4E Skyhawks were lost in the fire. Those lost by VA46 were: 149996 (AA416), 150064 (AA405), 150068 (AA407), 150084 (AA410), 150115 (AA412), 150118 (AA414) and 150129 (AA417).
Other Skyhawks lost were: BuNo. 152018, BuNo. 152024, BuNo. 152036, and BuNo. 152040.
Dave Dollarhide, VA-46, was in BuNo150129 (AA417) just forward of John McCain when the fire broke out. They both scrambled out of their cockpits and survived with minor injuries, but 150129 was blown overboard by an M-65 1,000lb. bomb, as were other Skyhawks. LCDR Fred White of VA-46, in a aircraft that was struck by a Zuni rocket, was one of those killed. Gary Stark, Fred White and Denny Barton of VA-46 were the only pilots to die that day. Dave Dollarhide was the only one in his flight of four to survive. VA-46 enlisted that perished were AMHC Richard L. Owens, AMEAN Richard A. Hatcher, PRAN Thomas D. Ott III, PRAN John C. Pody II,, AN Harol D. Watkins, and AN Robert Zwerlein.
Those in VA-106 killed were Petty Officers H. Fontenot, W. W. Stewart, R. N. Plesh, J. A. Earick and Airman C. R. Rich, J. A. Velez, A. R. Metz and G. E. Wall. Numerous squadron personnel were cited for their acts of heroism during the fire. 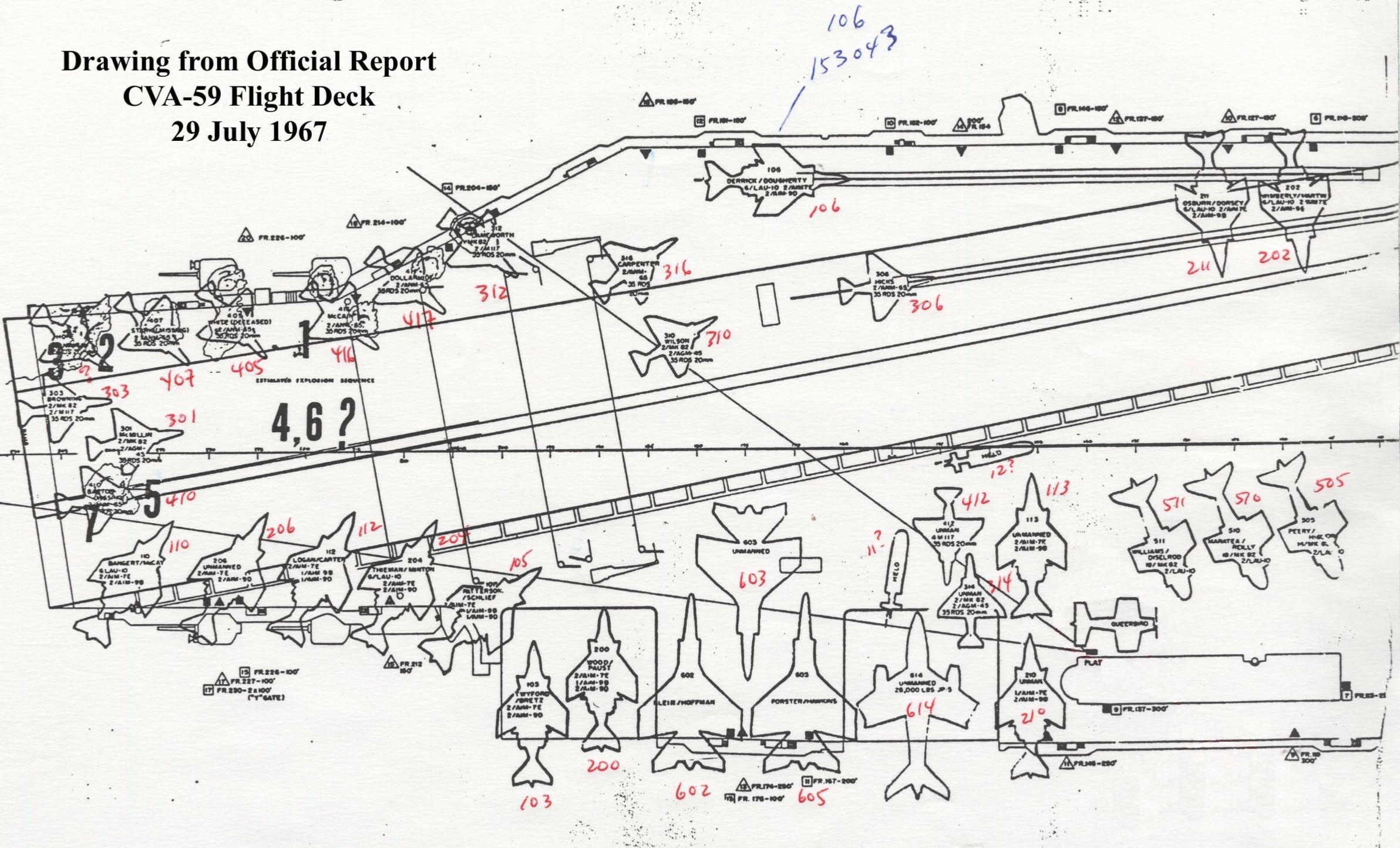 On 29 July 1967, the USS Forrestal (CVA-59) experienced a severe fire while operating on Yankee Station off Vietnam which killed 134 Sailors and aviators, injured 161, and destroyed 21 aircraft.  This was (and remains) the second worst loss of life on a U.S. Navy ship since World War II.  The disaster resulted in a very long list of “lessons learned” (many of which were “lessons forgotten” from carrier conflagrations during WWII) which transformed the U.S. Navy’s approach to fire-fighting, damage control, and ordnance handling in the decades since.  In recent years, articles have appeared on the internet that are extremely inaccurate, generally intended to attempt to unfairly tarnish the reputation of Senator John S. McCain III, who survived the fire.

At 1050, Forrestal commenced early launch of two KA-3B tankers, an EA-1 and an E-2A in preparation for an 1100 launch of a 24-plane Alpha Strike, the second of the day.  At that time, the VF-11 F-4B (#110,) was spotted on the extreme starboard quarter of the flight deck.  As the pilot of F-4B 110 shifted from external to internal power, multiple electrical malfunctions ignited one of the four 5-inch Mk-32 Zuni unguided rockets in a pod on external stores station 2 (port inboard station) which fired across the flight deck and struck VF-46 A-4E #405, piloted by LCDR Fred White, rupturing its fuel tank, igniting the fuel and initiating the fire.  Although the Board of Investigation reached the opinion that the Zuni rocket hit #405, there is some ambiguity in eyewitness accounts as to whether the rocket hit #405 or the plane next to it, #416, piloted by LCDR John McCain.  The rocket itself actually impacted the ocean beyond both aircraft.  Regardless, shrapnel ripped into both aircraft, and both were immediately sprayed by fuel and a pool of fuel ignited between and under the two aircraft.  Both pilots initially escaped from the flames around their aircraft.

The impact of the Zuni rocket dislodged at least one, probably two, 1,000-lb AN-M65A1 bombs, which fell into the flames.  The outdated AN-M65’s were being used because of an acute shortage of Mk 83 general purpose 1,000-lb bombs resulting from the intense Navy bombing campaign in North Vietnam which expended bombs faster than they could be produced.  The AN-M65 bombs had been brought aboard the day before, were over a decade old, in very poor condition and considered an extreme safety hazard by the Commanding Officer of the Forrestal, Captain John Beling, and according to the ship’s Ordnance Officer were an imminent danger to the ship and should be jettisoned overboard.  Doing so, however, would have necessitated scrubbing that day’s combat mission over North Vietnam, so Captain Beling reluctantly accepted the risk.

Damage Control Team Eight, led by Chief Aviation Boatswain’s Mate Gerald Farrier, which had received specialized flight deck fire-fighting training, immediately reacted to fight the fire.  Based on their training with Mk-83 bombs, they expected to have approximately 10 minutes to extinguish the fire around the bomb before there was risk of the case melting or cook off  with a designed very low-order explosion.  Chief Farrier immediately smothered the bombs with a PKP (“Purple K”) extinguisher in order to cool them.  However the AN-M65’s were not only unstable, their age and chemical composition actually enhanced the power of the blast (exact opposite of a Mk-83).  A little more than one minute after the fire started, one of the bombs fractured open, and Chief Farrier immediately ordered his team to withdraw, fearing an imminent cook-off.  At one minute and 34 seconds, the bomb exploded, killing Chief Farrier and almost his entire team (only three survived severely injured,) and also killed LCDR White.  A second bomb exploded nine seconds later and a chain reaction followed.

Both White’s and McCain’s A-4’s, fully fueled and loaded with ordnance, were destroyed by the blast.  Per the initial Mishap Board (“Informal Board of Investigation”) Report, “In  period of four minutes, seven major explosions shook the entire ship and some 40,000 gallons of jet fuel from aircraft spotted on the flight deck was ignited and contributed to the damage.  Fire-fighting teams, pilots, and squadron personnel on deck were knocked down, injured or killed by the series of explosions.  The fire spread with the first explosion to every aircraft across the entire after part of the flight deck.  Seven holes were ripped through the deck from explosions of 750 lb., 500 lb., and 1000 lb. bombs.  Rockets and 20mm shells shot across the deck, and ejection seats fired into the air.”  Actually, later analysis indicates at least nine bombs exploded on the flight deck, eight of them AN-M65’s with significantly enhanced blast over a normal 1,000 lb bomb.  Other bombs on the flight deck performed as designed and did not detonate due to the fire.

Most of the pilots on the aft of the flight deck were able to escape, but two more (besides LCDR White,) LT Dennis Barton and LCDR Gerry Stark, were killed in the explosions.  LCDR McCain was helping another pilot who was on fire when the first explosion occurred and barely escaped by rolling into the port catwalk as other bombs exploded; he then proceeded to assist ordnancemen on the hangar deck in jettisoning bombs over the side, to prevent them from exploding as well.  (Three months later, on 26 Oct 67, flying from USS Oriskany (CVA-34,) LCDR McCain would be shot down over North Vietnam on his 23rd bombing mission.)

The bomb blasts blew large holes in the flight deck, and flaming fuel oil poured down into the hangar bay and berthing compartments in the aft end of the ship, accounting for many of the casualties.  Some of the burning fuel was spread by untrained hose teams using water on a fuel (Class B) fire, in some cases washing away foam laid by other teams and reigniting the fire.  The death and incapacitation of the entire specialized fire-fighting team in the initial explosion had critical impact.  By the end of WWII, as a result of lessons learned during the war, most Sailors on ships had received training in fighting shipboard fires.  By 1967, the U.S. Navy had reverted to the Japanese model at Midway with specialized, highly-trained damage control and fire-fighting teams, but most of the crew was not trained.  Doing so probably saved some money, but the result in crisis was heroic, but uncoordinated, often ineffective and counter-productive efforts by untrained teams that resulted in needless additional deaths and injuries.  Nevertheless, the ad hoc firefighting teams of Sailors and Marines had the fire on the flight deck out by 1215.  However the fires below decks, spread by the burning fuel on water, were much more difficult to put out, with the last fire not extinguished until 0400 the next day.  The damage to Forrestal was so severe that she had to come off Yankee Station for repairs, commencing post-repair sea trials in April 1968.

The Navy investigation absolved Captain Beling of responsibility for the fire.  Beling, who had been in has cabin at the time, and supervised the damage control effort in his t-shirt, displayed considerable leadership throughout the harrowing 11 hour ordeal.  Nevertheless, the initial Board of Investigation stated, “Poor and outdated doctrinal and technical documentation of ordnance and aircraft equipment and procedures, evident at all levels of command, was a contributing cause of the accidental rocket firing.”  At that time, such a state was not unique to Forrestal.  The Commander in Chief of the Atlantic Fleet (to which Forrestal was assigned when not deployed) Admiral Ephraim P. Holmes did not concur with some of the results of the final investigation report, specifically the part that cleared Captain Beling.  ADM Holmes appended a Letter of Reprimand for CAPT Beling to the final report, which was removed by direct order of CNO ADM Thomas Moorer.  CAPT Beling made flag, but his orders to command of a carrier battle group were cancelled by new CNO ADM Elmo Zumwalt, and he was reassigned to command of the Iceland Defense Force, from which RADM Beling retired.

The Forrestal was the second (and worst) of three serious U.S. Navy carrier fires in the 1960’s.  In the first, the USS Oriskany (CVA-34) suffered a fire on 26 Oct 66 on Yankee Station that killed 44 and injured 138 when a magnesium parachute flare was accidentally ignited (human error) and a panicked Sailor threw it back into the magnesium storage locker instead of overboard; many of the dead were pilots killed by toxic smoke inhalation in their sleep.  The third disaster occurred on USS Enterprise (CVA(N)-65) on 14 Jan 69 while she was en route to Vietnam which killed 28 and injured 314, and destroyed 15 aircraft when hot exhaust from an improperly placed aircraft starter ignited another Zuni rocket and started a series of explosions.  In the case of Enterprise, lessons learned from Forrestal (and not having dangerous old and unstable ordnance on board) resulted in the fire being contained more rapidly with fewer casualties.  Enterprise put in for repairs at Pearl Harbor and continued en route to Vietnam in March 69, although she was diverted to Korean waters due to the North Korean capture of the USS Pueblo (AGER-2.)

The Forrestal disaster resulted in many lessons learned (and re-learned) and resulted in significant changes in the U.S. Navy in training for shipboard damage control, the biggest being (re)-institution of firefighting training for all crew-members.  Another was the installation of a flight-deck washdown system that could spread water or foam as needed, with the first being installed on USS Franklin D. Roosevelt (CVA-42) during her 1968-69 refit.   Another major change was establishment of the Weapon System Explosives Safety Review Board.  The training films “Learn or Burn” (which included film from the flight-deck PLATT camera that filmed the entire Forrestal event) and “Trial by Fire: A Carrier Fights for Life,” have influenced countless firefighting, damage control, and recruit training classes.  Even I remember from my midshipman days, “the Chief with the Purple K” – Chief Farrier, who sacrificed his life trying to buy time for aviators to escape their jets before the flames spread.